New to our inventory is the Creamsource Vortex 8.  The Vortex8 is a versatile 2×1 RGBW system with CCT ranging from 2200K to 15000K. It provides 650W of LED power providing the equivalent output to a HMI 1.2Kw Fresnel. The Vortex8 is IP65 water resistant with a built in power supply with advanced connectivity and is optimized for a range of applications with RGBW, a wide CCT range and high speed modes for shooting up to 5000fps.

We recently added a set of Canon FD Prime lenses! These TLS rehoused lenses are Full Frame (except the 14mm) and super compact!

We’ve added several new Aputure LS 1200d Pro kits to our rental inventory. The Light Storm 1200d Pro is the flagship Light Storm product and the brightest fixture in the Aputure and Light Storm lineup. It utilizes a 1200W Daylight COB chipset to compete on the same level as industry-standard HMI Lights.

Take a Tour of our Stages

If you aren’t familiar with our stages and would like to see what we have to offer, you can now take a virtual tour of Stage One or Stage Two. We think you’ll like what you see!

We’ve added the ARRIMAX 18/12 to our inventory.  Call us today to book it for your next shoot! The original Academy Award-winning ARRIMAX remains the ultimate choice for productions requiring maximum light output. The  parabolic facetted reflector provides continuous focus adjustment from 15° to 50° beam angle with sharp shadows that are easily cut.

Founded by Doug Smith, Production Consultants and Equipment (PC&E) began renting equipment in the early 1980’s. Doug started PC&E with the purchase of a single grip truck and a lighting package. It was important to Doug and to the growth of the Atlanta film and video market to give production companies and technicians the latest in equipment and studio space. Doug was still working as a freelancer in those early days and worked with others to grow the pool of available equipment in Atlanta. He then dedicated himself full time to growing PC&E into the premier source of camera and lighting and grip and well thought out sound stages.

In 2012, Doug Smith sold his interest in the company to the employees, and PC&E became an ESOP, an employee owned company.  Doug remained as CEO until 2018 when he retired from the role. At our 35th Anniversary party that year, Doug was presented with a proclamation from Governor Nathan Deal commemorating his contributions to the film industry in Georgia. He remained actively involved with PC&E in his role as Chairman of the Board until he stepped down from the Board of Directors at the end of June 2022. 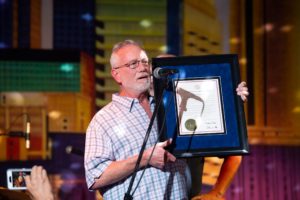 In July 2022, we celebrated the 10th Anniversary of the inception of our ESOP began working with a new Board of Directors.  We are proud to announce that our new Board members are  Chairperson Debra Shoaf, Chief Financial Officer of the Atlanta Community Food Bank; Board Secretary Jeff Doud of Jeff Doud and Associates; Jerry Pece, DGA First AD; Beth Talbert, VP/General Manager Studio Operations Eagle Rock Studios; and Angela Ham, PC&E Chief Financial Officer.

PC&E now has deep inventory of motion picture cameras such as the ARRI Mini LF and now the ARRI Alexa35 as well as others. A rolling stock of over 20 vehicles, LED, HMI and Tungsten Lighting, Chapman and Fisher dollies, Crawford generators, and three top-of-the-line sound stages truly makes PC&E your “one stop shop.”